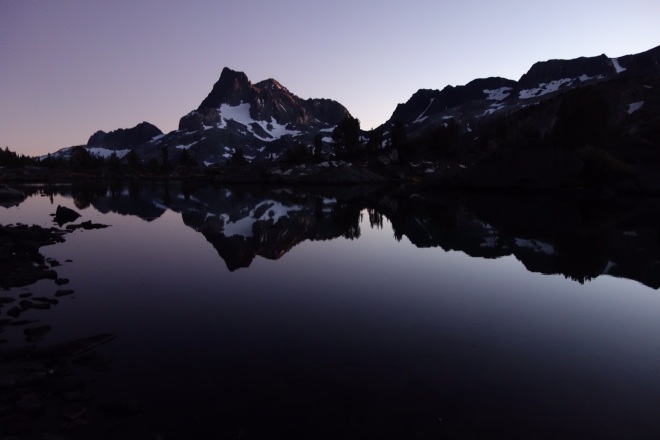 “The heavens declare the glory of God; the skies proclaim the work of His hands.  Day after day they pour forth speech; night after night they display knowledge.  There is no speech or language where their voice is not heard.”  Psalm 19: 1-3

We spent our final night and morning on the trail camped at Island Pass, elevation 10,255.  Usually passes are windy and cold places but since we wanted to finish the last 36 miles in two days it became the most logical place to stay for the final night.

It was an awesome place to spend our final evening … it was perfectly calm and the reflections off the tarn were stunning.

As the evening light faded the stars appeared in full array … and the clarity of the  reflections of the mountains and the stars off the tarn was overwhelming … if only I had the skills to photograph that scene.

The calm continued into the morning and we took in the dawning with continued awe. 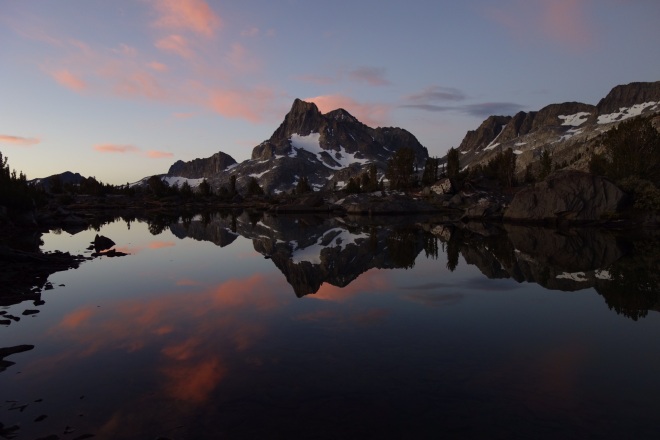 The final stage of the Tour de France is mostly a celebratory ride into the finishing line on the Avenue des Champs-Elysées.  The effort, struggles and competition of the first 21 stages is over and positions have been determined.  It felt like that on the final 10 miles of our journey … the passes were all behind us, the effort had been expended, the trail was level and smooth and took us to our finishing line at Tuolumne Meadows. 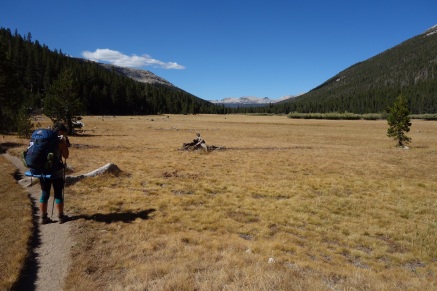 It has been an awesome ride.

Thank-you for reading and following us on our journey.  I hope to post an epilogue in a week or two as we begin to process and reflect on the past last three weeks.

This blog is written to be a kind of virtual trail guide to those who are already into hiking and trekking .... and an inspiration to those who are just beginning to contemplate extended hikes/backpack trips. Hiking is AWESOME! View all posts by Victor Doerksen